We are driving strangely in Pittsburgh these days.

We have gotten used to passing stopped cars, as long as we can get past them. They wait for us to drive by so they can back into their dug out parking spot, the one that has been saved by a "parking chair" all day.

We are driving below the speed limit, especially when white stuff is falling from the sky, and coating the road. In defense of our cars' transmissions, we drive to avoid potholes, even if that means crossing the median line for a minute.

And speaking of potholes, where does the macadam go? The road gets a hole, but surely the macadam has to go somewhere...

I drove into Oakland today, and driving out, I hoped to take the Crosstown Blvd. on my way to the North Hills. Instead, I was in the wrong lane at the wrong time and ended up driving through town. At one point I followed a car up a street I'd never been up before (because there was traffic stoppage ahead that I didn't want to contribute to.)

It was the first time in what felt like months that I crossed the river on the Veteran's Bridge instead of the RD Fleming or the Highland Park Bridges.

Driving to work wasn't that bad. I was in a foul mood, but beyond that, the roads were decent. Driving home was another story. The parking lot was a few inches deep of soupy slush, and my boots were soaked through before I had even finished clearing the snow off my car. I got drive-thru McD's, ate it in the Staples parking lot (the McD's parking lot was too treacherous, as it had not been well plowed from previous snows.) I ate every last golden fry, licked the ketchup off my fingers, and got back on the road, driving at 20 in a 25 zone, where drivers generally drive 30, 35 mph. It took me an hour, crawling through the snow, not caring if SUV's passed me by (though few did.)

When I got home, I forgot that I hadn't moved my parking chair into my space, so I parked my car in the middle of the road and went to remove...oh, it's still on the sidewalk. I got back in the car, parked it, and greeted Max, who has taken to shoveling and salting our walks as if he owned the house we live in.

We have such bittersweet history, and my heart pounded as I walked up the stairs to my apartment and put my key in the lock, going over the sentences we'd spoken:

Me: "It took me an hour to get home."
Max: "I'm glad you're home"
Me: "Yeah, me too." (I was already out of visual sight by the time the last two sentences were spoken, we spoke them as if we were characters in a play, these were the words we should say to to each other.)

If you didn't know better, you'd say it sounded like a conversation amongst intimates, not repartee between two people who live on different floors, people who rarely if ever pass each other in the hall. And yet we were intimates two years ago for about six months. I was his first girl, and I know the weight of that, since my first boy, more than twenty years ago, still impacts how I see men, and that ain't good.

Two years have passed, and only now am I realizing that part of me died in the last embers of our days as boy and girl. And though I am back, I'm me, there are parts of me that never regenerated, parts of me that I have survived these two years without, that only now I realize I miss, and I want them back. And I have no idea where they are, where to look for them.

It wasn't just him--it was the end of an era. I finally realized that this was the last boy I would ever date who didn't share my values. I had always dated attractive, fun, somewhat pompous boys who thought it was cute that I went to church, but had no desire to join me, or if they joined me, it was merely to support me, not for any spiritual reason of their own. And while dating Max, I realized that I needed someone who had their own spiritual reasons. So as Max and I were dating, I was coming to conclusions about all the boys I had dated in my twenties. Just as I was Max's first girl, Max was my last boy. The next date I go on will be with a man. Which is a really scary thought, since I am still very much girl.

Index roam if you want to roam around the world

Books I didn't read as of January

...that need to go back to their respective libraries:

Today I will: a year of quotes, notes, and promises to myself by Eileen & Jerry Spinelli
(found that it was more of a "literary devotional" than what I wanted, with a quote, a homily, and an affirmation.)

Girl Group Confidential: the ultimate guide to starting, running, and enjoying your own women's group by Jennifer Worick. (I find that I want to be that person that starts something but in the end, right now, for better or for worse, I prefer to just show up.) But it looks like a good book. Not sure I even opened it...

the amazing adventures of working girl: real life career advice you can actually use by Karen Burns
I wish this book had been available to me sixteen years ago, and it's the sort of book I would recommend to my sister, who is ten years behind me in her journeys, though her journey at work is so different from mine. the hold slip in this book is in the chapter called, "boss from hell." Let's not go there.

Biggest Loser simple swaps: 100 easy changes to start living a healthier lifestyle by Cheryl Forberg et al. This is the sort of book I would buy if I wanted to admit that I'm not crazy about the fact that I've gone up two jeans sizes. But I never ever opened it, and it is now the item on my library record that would block me from taking anything else out if I didn't know how to override that. The library that owns it wants it back or wants my $28.00. (This is the book that started this exercise.)

You're so money: live rich even when you're not by Farnoosh Torabi. Another book that I would buy if I bought books right now. I started reading it, but I'm still pretty much in denial. Oh, the tax refund will take care of...etc. BLECH!! I got as far as p. 16.

Cooking with all things Trader Joes by Deanna Gunn and Wona Miniati. If I read cook books...This book still has the hold slip in it, which means I never even cracked the spine.

Writing and Publishing: the librarian's handbook. Edited by Carol Smallwood. This is the book I would read if I believed that I could read it at work. (I guess I'm not a committed enough librarian that I want to take my work home...) And since it's an ALA guide, it probably retails at $50. It's the one book I would buy tomorrow if I had an extra $50.

*I apologize to all my Indy book lovers that all my links are Amazon. Unfortunately, it is the easiest way to link to book titles, and give folks the option of reading reviews beyond the tiny ones I'm giving here.
penned by Sarah Louise at 3:01 PM 1 comment:

I saw the angel in the marble and carved until I set him free.

So, here we are. The 4th biggest snow fall in Pittsburgh weather history. Breaking all the records for February snowfall.

To commemorate this momentous occasion, I constructed this photo essay...for you! 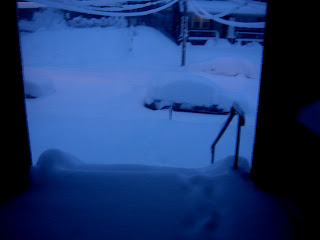 This is the view from my street at 7 am, taken through the glass door. 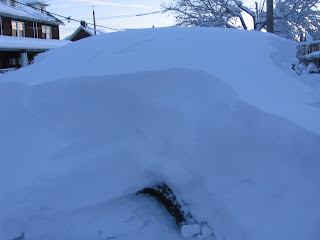 Seriously, that is a lot of snow. 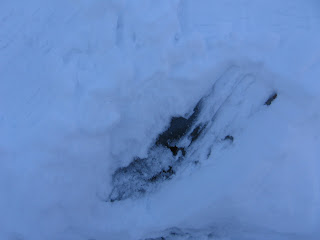 Wow, there's a bit of car under there! 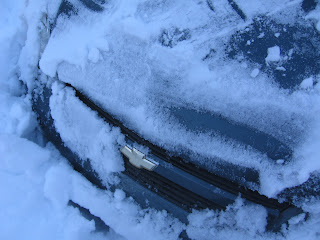 Oh, and we can see by its markings that it is a Chevy. 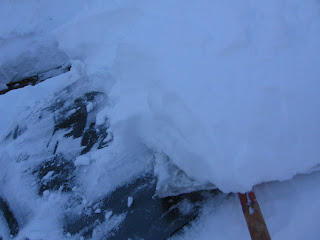 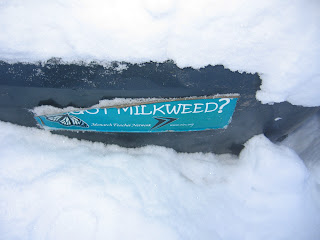 It must be my car, it has a "Got Milkweed?" bumper sticker. 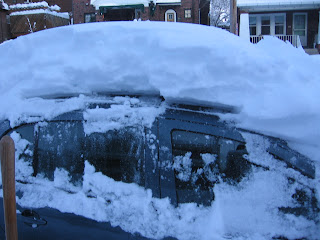 It's beginning to look like a car under there... 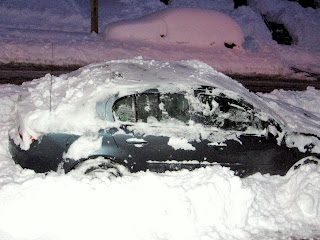 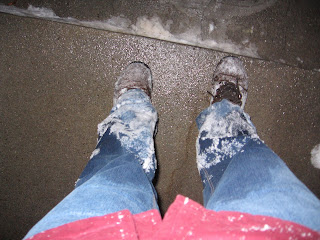 I am covered in snow, just as dusk is falling. Time to go in and make some dinner.