to babies in 3 minutes. I posted about allergies on the SL gets better blog.
penned by Sarah Louise at 9:57 AM No comments:

it was better in my mind...

So, in the bath (eureka) this morning, I was thinking about my favorite show of late, The Good Wife. And everybody's dreamboat, Chris Noth. How, if at almost 38, I had a locker, his picture would be up there.

This is such the perfect role for him, and at a perfect time. He's had all this time to be the good guy/bad guy on SATC, and so women are used to him being a cad, but coming out good in the end, and now he's in this role where he is in JAIL and still, looking oh so cute, and...

this is not coming out word perfect like when I was in the bath. Darn. It was all beautiful and it was going to convince you to watch The Good Wife, if you aren't already doing so, Tuesdays at ten, CBS.

Oh, and there's my timer. Gotta get the quiche out of the oven, yum.

Well, I posted. And posting, this month at least, means just that, even if it is warmed over and not so tasty.
penned by Sarah Louise at 8:54 AM 4 comments:

I woke up thinking about 8+7

The trouble about this kind of blogging (which is not mommy bloggging, since I have no child, but not niche blogging since I don't blog about old cars or poker) is that I tend to write about myself. Ah, that favorite subject. But since I write about myself, and my ideas, I get personal. And so I forget that this is a computer and I want someone to answer me back. Which happens, sometimes. But not all the times. So my search for approval and friendship on the interwebs brings me right back to the fact that I need more face to face time with people. Which I am working on. Also, writing morning pages (3 pages every morning, a la Julie Cameron and TAW) helps, because instead of blurting out all my ideas to a computer and expecting approval, expecting conversation, I know that I'm writing on a page and that no one will read it until I want them to, and that I'm more having conversations with myself.

Last night, after church, I spent about an hour finishing transcribing the first story that I'm putting in my MFA portfolio. (A fiction portfolio should have 2 stories and equal a total of 20-30 pages.) So I rewarded myself with what I thought was the last 20 minutes of Cold Case. Nope, it was 3 Rivers. Well, I'm not going to start with another show (I already am loyal to The Good Wife and Numb3rs) so I turned the TV off. Moved some furniture around. I got rid of a desk and a bookcase this weekend, and to pull of the getting rid of part, I had to move furniture. I used to have a tiny bookcase at the top of my staircase, where I put my keys, etc. But it was a little tight manuevering. But I never thought about putting it somewhere else...until I got rid of the bookcase that was on the landing. And so all weekend, the landing was NAKED. (The horrors!) So I thought, why don't I put the keys bookcase on the landing? So I did, angled it, and I think it looks lovelier than it did in its original home. Maybe I'll start using it for mail, instead of piling mail on the floor of the landing... 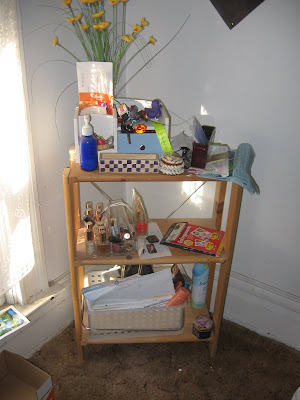 Oh, so where was that train going? Oh, Cold Case. So after I'd done some apartment improvement, I turned on Cold Case, which was 10 minutes in. And soon realized that while it is a cool show and I love seeing the flashbacks, it is not on the same par as The Good Wife and Numb3rs, so maybe I would finish my book instead. Which I did.

The Year of the Rat by Grace Lin, sequel to The Year of the Dog. A nice middle grade book about a first generation Taiwanese-American girl (her parents are immigrants) who lives in upstate New York. It's also illustrated by the author, little whimsical drawings, which won my heart over. A little confusing, since the author says it's fiction, yet she uses her own home names, Pacy (for home, with family) and Grace (for school). So I kept wondering...is this a memoir? Apparently not, according to the author's note at the end, though the part about a friend moving away was true. But why use your own name in a novel? Other than that bizarro twist, I would recommend it, ages 8+

The Grace Livingston Hill Story. Hi, I'm Sarah Louise and I'm a GLH-aholic. I'm better than I was, but I used to tear through her romances like crazy. The first one I read was White Orchids. In a flurry of I'm getting rid of stuff because I'm/we're moving, I got rid of it at the end of high school. I missed it, and now have another copy. Phew! That actually happened with another book, Sparrow Lake, too, which is out of print, so more it's more of a story that I have another copy, just happened upon it one day and said, yes, this is that book that I thought was too sad to ever read again but I want to read it again and be sad. Where was I? Oh yes. I really liked the Grace Livingston Hill bio, because her books can be a little sugary and we're so poor and honest and godly. Her first husband was a morphine addict! At the time when they didn't know morphine was addictive and there were no rehab centers. He was a pastor, so all the more shocking. And her second husband was a musician who was very childish, who she finally told, leave, and don't come back. No word of an actual divorce, since, you know, not godly. While I love her novels, they are sheer escapism and now I understand a little more about why. SHE needed the escape. And I never knew that the books were her bread and butter, since her first husband died at 35, leaving her with two young daughters to raise. So, of course they were a little formulaic, she was pounding them out, 2 or 3 a year.

Oh, and the title. I have always had trouble with 8+7. How in the heck do they make 15? But I was talking to my mother (retired schoolteacher) about it yesterday, and she said they are now teaching about the "doubles" in math. 6+6=12, so go up or down one for 13 or 11. Same with 7+7. It is so much clearer!! My mother goes back to teaching Wednesday. Her former colleague is having a scheduled C-section Tuesday and my mother will teach for the duration of her maternity leave, which is til the end of the quarter, some time in February.

Well, my dearies, off to take a picture, the one you see up there. Ciao for now.
penned by Sarah Louise at 7:51 AM 1 comment:

I had completely forgotten about NaNoWriMo and NaBloPoMo. I have decided to participate in the latter.

Stay tuned, I have a post about Nick Hornby's new book, Juliet, Naked, and how I thought about it a lot while watching the movie made from Michael Jackson's rehearsals for his once and no longer future last concerts. But if you want to go see This is it, don't wait for my review, it needs to simmer. And if you're on the fence, go see Amelia. (Next on my list.)

I bet you're wondering where I've been and why I'm not blogging as much anymore...it's that I'm trying to work on a portfolio and it's hard to keep up with daily blogging, Twitter, Facebook, oh, and that pesky thing that pays my bills, work.

I'm also trying to get away from the approval curve. A lot of why I blogged in the beginning was because I thought it was something cool people did and I wanted to be cool. And when I lucked into a sweet community and started getting comments, I felt like I had hit the cool pot of gold. The other night the president of Drew, the first African American and first woman president etc, etc. was on Tavis Smiley. And Tavis asked her about approval. And she said (paraphrased from memory, folks), I work hard to excel, not for approval. This is the way I would do it anyways.

So I've been working on very non-glamorous Morning Pages, as a part of my "artist in recovery" work with Julia Cameron's book, The Artist's Way. If you can do it, get some friends to do it with you, it's hard to stay honest if it's just you. I'm in a closed blog with some Twitter friends, and boy is it good to be able to say, no, I did not write today, and for that to be okay, because other people didn't either. Of course, we seek excellence, but we are human, and we will always always always fail.

So, I hereby promise to write most days this month, right here. I do not promise to write every day or to only give you fresh writing every day. But I'll be here, and if you show up, I hope you take a minute to say hi. It's the only way I'll know you stopped by, because I don't have a thing-y that catches visits. See? It's been so long I can't remember the name of that silly thing-a-ma-jig-y, because it was tied in with my own personal am I good enough approval rating.