Hope is the thing with feathers...reminisces of poetry class

Thanks to the folks at Bartelby.com/verse, I have access to Emily Dickinson. I found her this morning in my Modern Poems anthology (she is a precursor to the moderns, with Walt Whitman, Yeats, Gerard Manley Hopkins...) This poem was not in the poems anthologized, nor the one I was looking for, I don't know what it was. I'd know it when I saw it.

I need to get a copy of Miss Dickinson's poetry in book form, but for now, the Internet will do. My Modern Poetry class was my sophomore year at Carlow, and Sister Maureen was my professor. She never gave A's, but I got them from her. It was about that time that I realized I needed a harder school. I wish I had gone to see her after I'd graduated. She died...I should find out more about that, maybe. Her class was where I became an English major. I loved dissecting the poems, looking for why THAT word. She taught us that in a poem, every word means something. So you might as well look up every word in the dictionary, because it's possible that the poet did. Nothing is a mistake, nothing is wasted. I was a new Christian, and I loved all the footnotes in Eliot, finding the Bible verses he referred to. I was happiest, on my bed on my room on the tenth floor of Frances Warde Hall, my Bible on one side, my Ellman/O'Clair* on the other. I suppose I had the dictionary out too. I would then go, at night, to the library, and use one of their eight computers to pound out my papers.

My windows didn't have screens. So some days, when I was bored, I would make a paper airplane and fly it out my window. I had never lived that high up. It was the top floor of the dorms, and from my window, I could see forever. Across the river, to the last working steel mill. All of the roofs of Oakland lay before me. I loved that scene, and I have many photographs that I would just take out my window. Maybe I'll find some and scan them for here.

***
Writing this, I realize what a different time that was. Students now sit on their beds with their laptops. No need to go to the library for a PC, they have one right here. No need to touch the paper thin pages of the anthology, the dictionary, the Bible, one can find all the poetry one needs (with commentary) online. I hope there are students like me, though, that prefer the feel of paper. For whom writing is partially a workout of the arm, pages of ink across a pad of paper.

__________
*Ellman and O'Clair were the men who wrote Modern Poems. Mine is the Second Edition, from 1989. By the time the second edition went to press, O'Clair was the "Late Professor Emeritus" from Manhattanville College.
penned by Sarah Louise at 7:21 AM No comments:

Sara Zarr posted a link to this blog post on Twitter, and it's short enough that I'm posting it here. The writer is describing bipolar disorder.

"Letter to an old friend"

Is it okay if I call you friend? I’ve known you for so long and it is time for you to be a friend. You are with me always. Sometimes you sit in the living room of my house, powerful in your presence. At other times you are like a guest taking a nap in an upstairs bedroom. I used to fight you or plead with you to leave, but I don’t do that anymore. I let you be. I’ve discovered the gifts you bring with friendship. I am grateful for the clarity you allow, for whatever energy you permit, for writing, above all for that, for the daily work of living. Who would have ever thought that we would end up being friends, that even as I do all I can to keep you gentle, I could welcome you? I accept you and limit you all at once. Come on in, there’s a rocking chair for you by the fire, but it is still my house. Now that you’re a friend, I don’t know what to call you. Your medical name sounds too formal and distant. You are more than a condition. You’re not me and yet you are a part of me. The metaphors used to describe you seem too impersonal. Darkness, grayness, the words lack accuracy. You are painfully bright at times. To call you by your symptoms is to treat you like an enemy and I don’t want to do that anymore. I’ll simply call you my old friend. I call you my old friend because I know you, I’ve seen through you. I’ve even seen compassion and hope in you. These are the things that only friends can see. I know you now, so well, and so I call you my old friend.

THESE ARE NOT MY WORDS, they belong to Francisco X. Stork. But they resonate so strongly.
penned by Sarah Louise at 4:36 PM No comments:

So...I'm going to be working on labels. Which means that a lot of posts will be republished. Which will mess you up if you get this blog via RSS. So in advance, I apologize, and if you're wondering what's going on, that's what it is.

Happy Birthday, "Story of a Girl"!

Five years ago today, Story of a Girl by the first time novelist Sara Zarr, arrived on the scene. 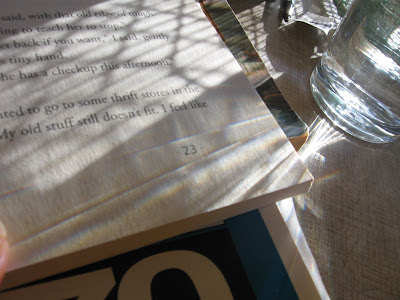 I celebrated by reading it over breakfast. Last month, I read Kathleen Norris' Dakota over breakfast. What a difference between those two books, written by equally talented writers. Congratulations, Sara!
penned by Sarah Louise at 12:18 PM No comments:

Index 5 years is wood or silverware, January 2012, story of a girl, when i grow up i want to write like sara zarr

If I look past the venetian blinds on my windows, I can see the Christmas lights on the big house on the corner.

If I look to my left, Meryl Streep is smiling out at me from the cover of this month's Vogue. I cannot WAIT to see her latest movie, where she plays Margaret Thatcher, I think the movie is simply called "Iron Lady."

If I look down, I see that I still have some Gatorade from this afternoon's stomach ickyness. Yum. It's blue. I have no idea what flavor that's supposed to be.

If I look straight ahead, there are some purple dried flowers that I saved from the birthday bouquet from my dad. (He's a big believer in flowers, as am I.)

If I look to my left, and up, I see a poster with the cover of Barbara Cooney's book Eleanor, about Eleanor Roosevelt's childhood. It's signed, was a gift to the Barnes and Noble I worked at in the mid 90s. Barbara Cooney also wrote Miss Rumphius, one of my favorite picture books. Cooney died in 2000, the year before I entered library school.

On the bookcase to my right, I have an eclectic collection of collectibles, (would they be called curios?) including a plastic figurine of Smurfette wearing a cap and gown. It was made in Hong Kong in 1981, but I think it was given to me on the occasion of my sixth grade graduation in 1983. At the time I lived in Honduras, not everyone went beyond sixth grade in their schooling, so the sixth grade graduation is a big deal. (At the American School, it was assumed that kids would, but it gave parents another excuse for a big party.) I had a new dress made, a pink dress that I wish I still had because it was exquisite. Next to Smurfette, a piece of bleached brain coral, from the Cay Islands that lie off the Caribbean coast of Honduras. Next to it, a pin cushion that was a craft in ?? grade. A Dalmatian puppy Happy Meal toy is next to that. The puppy is perched atop a blue post box and if you spin it, it's a snow globe with an envelope and glitter. I got a lot of Happy Meals the year I was in library school, I drove through for dinner on the way to my evening classes. Next to the Dalmatian puppy, an ornament I made for the staff Christmas tree, the last year we had one at my library. It's a birdhouse with glitter for snow on the roof and a red bird perched on the front. I painted it green. Behind the ornament, a wooden tulip, red, of course. (In my mind, tulips, if they are not living flowers, are red. I always draw red tulips, no other color do I draw.) A tiny blue and white windmill in the Dutch Delft style is perched on a square glass box. Inside the glass box are very old dried rosebuds. Behind that, a colorful memento from Niagara Falls, where I went with my parents as a graduation gift when I got my Master's in Library Science. A Sacred Heart of Jesus candle, a tea cup and saucer that belonged to one of my grandmothers. (I have another one somewhere else, that is from my other grandmother, but I can't tell which one is which.) Inside the tea cup, more dried rose buds, and two spoons from my paternal grandmother's spoon collection. One spoon needs polishing, and badly! It is from Amsterdam, and on the handle, depicts a church that could be a Cathedral. (But I can't tell, because as you may or may not know, a Cathedral is the seat of the Bishop. So even if a church LOOKS like a Cathedral but is not the seat of a Bishop, it's not a Cathedral.) The other spoon seems to be made of stainless steel but has a cameo at the top that looks to be Wedgwood.

And that's only half the items on the top of this particular bookshelf. Maybe a full tour and photos next time?

My things have so many memories. Writing this soothed me...and now it's time for bed.
penned by Sarah Louise at 9:33 PM No comments: