So...I'm meeting someone for lunch today. A librarian that I "met" through at least two mutual friends. We've been twittering and facebooking and emailing and finally today we're having lunch!

And we're doing brown bag. So I had to go to the grocery store for some things to go with my PB&J and it was like shopping for a date...shall I get pretzels, and what kind? Oh, and I should get some fruit, so I'm all balanced. I ended up getting yogurt, because I actually eat that...

And I got quarters, just in case my usual jammed parking meter is a) not available b) finally fixed.

In other news, my back sprain is probably not just muscle but also ligament. Which takes longer to heal because less blood flows near/around/through them. (Will have to do a Google/Bing/WebMD search.) So 2x weekly chiro visits for a while.

What else? Listening to A long way down (Nick Hornby) for the umpteenth time. I've decided I'm buying the audio soon, as it's one that I get out on a regular basis. It's grumpy enough to be okay when you're having a bad day but funny enough that you might laugh as you whiz through the intersection in Morningside before the Rite Aid.

Speaking of Rite Aid, the price of Epsom Salt has gone up. I bought two boxes for $2/each, but that was the sale price. The regular price seems to be anywhere from 3.39 to 3.99. And it looks like the norm is going away from the milk carton packaging to plastic bags, ick. But, bonus, I got some more tickets for the Life game they are playing/promoting.

See you next time!!
penned by Sarah Louise at 10:34 AM No comments:

To blog or not to blog, that is the question...

You have surely noticed that I'm barely pretending to keep up this blog. And that I supposedly off working on studying for my GREs, preparing my portfolio for my MFA application, and other "important" work.

So I've been contemplating coming back, a bit a week...maybe.

But I couldn't not share this beautiful book with you, it reminds me of Paula's blog. Blogging for Bliss: crafting your own online journal. This is the book I'd read if I had time to really craft and really blog. It's by Tara Frey and features what seems like a hundred blogger profiles. So much of it is the stuff we all learned by trial and error, but it is a beautiful book, one that I would recommend if you are really hoping to make it blogging, for reals, not just piecemeal like yours truly.

The best part are the almost 100 blogger profiles. The other stuff is mostly on the job training. (Unless you are a beginner. Then, it is doubly great.)

Tara's blog, typing out loud, is stunning. It is a place I would go every day, (if I trolled the blogosphere daily, which I don't anymore.)
penned by Sarah Louise at 1:42 PM 4 comments:

(in which Sarah Louise plays film critic, poorly, and scours Rotten Tomatoes site to find proof that she is correct.)

Someone tell Hollywood that they need better storytellers. Two weeks in a row I've gone to the movies, expecting laughter and a good story. I got the first (I even got tears with today's dish) but story was lacking.

When I was just a girl (to the tune of "Loves me like a Rock" by Paul Simon) in English, we learned about the up and down of a plot. You have the beginning, the climax, and the rest. Sometimes you can get away with having the climax at the very end. But sometimes you can't. Especially if your story isn't strong.

That is what happened with the two vapid movies I saw the past two weeks.

(Spoiler alert: the two movies were "It's Complicated" and "Up in the Air.")

To preface, both had great trailers. And UITA had six actual people that I converse with online or in person tell me, "oh, good movie."

If you consider a movie that has good acting and makes you laugh enough, okay. But I don't. I want good story, and I will take bad acting if you give me good story.

Both of these movies were headed in one direction story wise, and then climaxed, and went in the opposite direction (or, in both cases, took the main character exactly to where they were when the movie started, just with a few more experiences under their belts.)

In "It's Complicated," Meryl Streep's ex-husband Alec Baldwin wants to get back together b/c his current marriage is failing. It sure looks like they're having fun and that this is where the movie is going. But no, we are not given all the information, and Meryl comes to the conclusion that they've been apart too long and it would never work. Now, yes, that is a good story. IF you fill it out with Meryl really wrestling with it. And you show not tell us how it's totally NOT going to work. But no, Nancy Meyers decided that she could just tell us that Meryl would be better off with her architect Steve Martin, who seemed entirely milque toast. Blech.

In "Up in the Air," George Clooney loves his life lived in airports and airplanes. He fires people for a living, he, the man who is kind of married to his job. Two women come into his life, one as a protege, one as a love interest. Wow, maybe George is going to have a chance to see what life is really about, relationships...and then WHAM! We find out that Alex (George's on the road lover) is married, with kids. That she was playing George, and figured George was playing along. OUCH! Now, yes, that is good storytelling. If you give us some foreshadowing. If you show us some character growth. However, if you then don't show George changing at all, and you then put George back up in the air (did I mention he was going to be grounded, the job was changing) and he's back where he was at the beginning. Nothing has changed, not really, except that now George realizes he's lonely. And then the movie ENDS.

Now, I like other work by these directors. Nancy Meyer's movie The Holiday is sheer chick flick smaltz and I eat it up. Yes, we have no idea if these transatlantic romances will work, but we don't care. They dance the night away and tomorrow will take care of itself.

I liked Thank you for not smoking and I adored Juno (Jason Reitman's other two films.)

Some other folks that agree with me on
:

From Dan Jardin's Cinemania: Jardin talks about the contrast of the folks that have lost their jobs (interesting, vibrant) to the boredom of the business travelers (Clooney, Farmigia, and Kendrick)

...these moments of honesty that hover around the fringes of the film serve mainly to highlight the banality of the main plot line and the superciliousness of the lives of the characters we are supposed to care about. I wanted to learn more about the real folks whose lives had been ruined, and would have been quite content had I never met [Clooney, Farmigia, or Kendrick.]

Jay Antani at Cinemawriter.com talks about the depth that could have happened in Reitman's movie:

It’s a movie of missed opportunities, wherein Reitman could have plumbed the dark depths of the betrayal, loneliness, and denial that make up the core of Bingham’s wounded self. He could, thereby, have made the moral payoff of his conclusion feel well-earned and satisfying. As it is, he’s got the right actor for the job, but his movie lacks the guts.

I could go on. But it's late, and this blogger is out of practice writing using other people's words...

I just think that if I'm going to spend good money on popcorn and a movie ticket that I should get a good story along with good acting. Because I care the most about story. I will forgive bad acting for good story, but NOT the other way around.

Index it's complicated, movies, up in the air

At least my plate has penguins on it...

Watching the Winter Classic. Learning that I really don't care about hockey if I don't know who is playing. Off to check movie times... 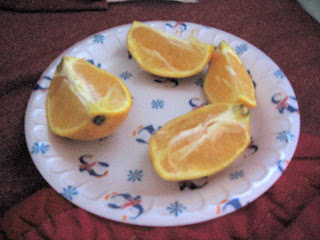