Yes, I see how you might think that those are two separate resolutions but they are not. They are my morning ritual, and I miss them dearly.

Via twitter today, found this post about journaling, which breaks the process into levels, such that if you are timid, you can start with Level 1 first and then expand.
penned by Sarah Louise at 2:35 PM 2 comments:

My mother and I spent the day together driving. She drove most of the way, I drove us from Waterworks (where we saw the Voyage of the Dawn Treader) to Trader Joe's. She spent the night, which meant a morning of cleaning and clearing. When she left, I gathered up the magazines I'd gotten out of the library for an article I had to write, and arranged this lovely birthday gift from Lilly. 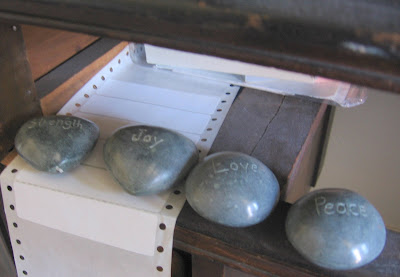 Also, I learned today that a bloggy friend had a baby ten days ago!! We share a middle name (Louise) but it's because her mother's name is Sarah Louise as well.

(this is the advent devotional I wrote for our church's advent booklet.)

The people walking in darkness have seen a great light;
on those living in the land of the shadow of death a light has dawned. (Read Isaiah 9:2-7)

Every year while on summer vacation, my night owl sister and I share a room. Inevitably I wake up before she wants to even think about morning, and I need to turn on the light to get dressed. So we share my sleep mask. I wear it at night, so my sister can read with a light on late into the night, and in the morning when I want to turn on the light, or open the drapes, I hand the sleep mask over to a groggy form that groans a thanks.

The darkness that Isaiah describes here is not a literal darkness. Sleepy Israelites aren’t waking up to a literal dawn, handing over sleep masks to those too tired to greet the sun. Instead, Isaiah describes people who have been living in the land of the shadow of death. As we read the verses that follow, we see that light is the first of many improvements. Not only can they see, but the light that dawned on their darkness has opened their lives. Each verse describes something better than the next. And in verse 6, a child is born. The poet Carl Sandburg said “a baby is the God’s opinion that the world should go on.” This child is not just ANY child, this is the Messiah, who carries special names: Wonderful Counselor, Prince of Peace. But none of these improvements could have happened in the dark. The light, first, was the catalyst for changes, after.

God of Light, show us the beginning of your wonderful plan, the plan that started with a baby, your son Jesus.

As far as Christmas preps go, I am SOOOO grateful there is a hockey game on tonight. First intermission: first load of laundry, drop something at Sally's parents' house. 2nd intermission, check on laundry. All the while, I will be listening to Mike Lange and packing for my mini mini vacation down to Virginia. I still have one person to shop for.

penned by Sarah Louise at 4:37 PM No comments:

Index advent n'at, bird as in my sister, december 2010

To bare or not to bare, that is the question

Which might be part of why I haven't been writing as much, because I don't want to be that transparent.

I just sat and wrote about some things that happened a long time ago at Christmas. And I think I'll hold them in and ponder them in my heart some more.

Stay warm, and stay in touch. And for heaven's sake, have a cupcake.
penned by Sarah Louise at 8:45 AM 1 comment:

Index cupcakes, december 2010, it's too cold to be bare, to bare or not to bare

Hi! We'll do bullets, b/c life has been CRA-ZEE ovah heah.

This is the busiest weekend of the year, I think: I skipped Bible Study this morning to work on the article (although I have been back since I last wrote), I made quiche this morning for the potluck this afternoon, tomorrow is a neighborhood party (where you walk from house to house for Christmas food goodies), and Saturday after work, Lilly and I are going to the movies. Sunday it might REALLY snow, and if it does, I'll write at home, and if it doesn't I may spend some time at the graduate school looking at articles. I haven't been to a movie since Thanksgiving. I know! And today was the first day in eons that I watched breakfast television...which included old episodes of the Pink Panther...um, I had no idea it was a cartoon first. (But so very awesome!!)

Hopefully soon I'll have brain cells enough to write something that has wit, but this will get you updated for now.
penned by Sarah Louise at 3:31 PM 1 comment: