This post is about cupcakes. I had dinner with a dear friend and his wife this week and I explained the rules of cupcakes, so far. Since I invented the "cupcake game" as it were, I get to make the rules. And they change, to my delight, like Calvinball, the game Calvin played with his stuffed tiger, Hobbes.*


I started giving cupcakes because of my friend, Holly, who was always making them, or looking at pictures of them. It sort of became a thing I gave away on Twitter, when anyone was having a bad day. I figure, not everyone likes to hear "I'm praying for you," and it's not always appropriate. But I haven't met anyone (yet) that doesn't like an imaginary cupcake. Well, actually, I do give Sara Zarr cheese, since she can't eat cupcakes. I generally give her wheels of gouda.

Anita Silvey is known for her hats. If I'm known for my cupcakes, well, that just makes me smile.

Little known facts: I don't eat actual cupcakes very often. I haven't actually made cupcakes in my apartment stove since I started giving them away on Twitter, circa a few years ago. I have sent actual cupcakes to events, (well, at least one event) and I have eaten cupcakes at Magnolia Bakery in New York. Funny story. The next to last day in Florida, I popped into the Gainesville Junior League Thrift Shop. They had an "I heart NY" shirt, but instead of a heart, it was a cupcake. The back said "Magnolia Bakery." I figured, if the shirt fit, I had to buy it. And I did. So I ate cupcakes in New York, but I had to go all the way to Florida to get the shirt. 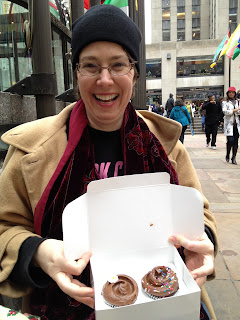