So, when one names ex-boyfriends after favorite book characters, it can backfire... 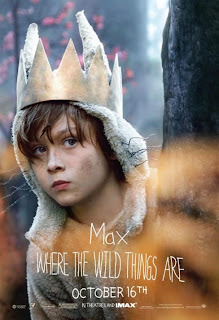 Banners from /Film, where you can find out more info about this "Coming SOON!" movie.
penned by Sarah Louise at 3:20 PM 4 comments:

Index where the wild things are

So, when I was working for Fox books, my friend Tim told me about the I Ching. It's the same book, but when you look at it every day, the message changes. I used to feel that way about Eat Cake. Now, Sex and the City re-runs are my I Ching. (I suppose as a Christian, the Bible should be, but I'd rather not say the Bible is my Buddhist answer book.)

I used to have Eat Cake sitting on top of the CD player in the loo, so I read bits every day. And it always spoke to me. Then I dated a struggling musician and had intimacy issues and money problems and Eat Cake was no longer removed enough from my life. I haven't touched it in a long time. (Soon, I think, I'll be ready to re-read.)

But now, when I have a vile day, I know exactly which episode to turn to: when I can't cry because something horrible happened, I go to the one where Miranda's mother dies and Sam can't get a release until the funeral. Or yesterday, I went for the one where Carrie rebounds with the new Yankee and then cries in his mouth after seeing Big in a bar. She dials the pay phone and you don't know who she's talking to, and you don't know who she's meeting "at our place" until the camera pans to Miranda.

I gotta go. It's this thing called work. They pay me to correct catalog records and help pubescent boys find the next great sci fi series, preferably one he has never heard of. (He's tired of vampires, when I recommend a Westerfeld.) (Me too.)
penned by Sarah Louise at 9:11 AM No comments:

So, ironically, here I am, again, less than an hour later.

This is the one I found today: Creative Writing Prompts.

I find that I'm a lot better with the prompts that are like "write about an empty glass" (which I did) than write "I remember..."

Okay, I did today's writing, back to Season Six Part One. Miranda has figured out she loves Steve, Berger's book option got dropped, Samantha is helping Smith with his acting career, and Charlotte is sad because she lost Harry, after she converted to Judaism so they could get married.
penned by Sarah Louise at 8:57 PM No comments:

This is an interesting development.

I never knew Jose Saramago was blogging, but hey, he's stopped to finish his novel.

I have been trying to post to this, while trying to work on writing.

Not saying that I'm stopping, but I'm wondering.

Even though I went walking this morning, and was thinking of blogging. But I came home, and nothing.

Except some pictures (which I will try to remember to post) and this great quote from Ralph Waldo Emerson.

“Few people know how to take a walk. The qualifications are endurance, plain clothes, old shoes, an eye for nature, good humor, vast curiosity, good speech, good silence and nothing too much.”

Except now, it's not about the lint.

So...I waited all week to do laundry, knowing that I didn't want to have to deal with it on a night that I worked til 9pm. So last night, I put a load in around 6:30 p.m. I moved around some books for an hour, went back downstairs at 7:30. Well, it was still going, but at least it was in the "Final Spin."

I did a bunch of other stuff, including getting a Popsicle, calling my parents (line busy), calling Michigan Sally, and gabbing away. While we were talking, I thought, let me just see where the load is, maybe I can transfer stuff to dryer. Um. Still in "Final Spin," a half hour later.

My clothes were almost dry! Who needs a dryer? So I unplugged the washer (there may be a shut off switch, but this is a laundromat style coin-op and so there aren't really dials to work with.) Upstairs again, I wrote an email to the landlord.

Luckily, I washed towels and underwear last night, so I'm set for a week. I have enough shirts to last me a while, since my mom and I did 4 loads of laundry when she came to visit a few weeks ago.

On the depression front--my body is doing bizarre things that feel like "not depression":
But this afternoon, at work on the Children's reference desk, I retreated inward and in between helping patrons, I transferred my Twitter favorites into Delicious. I grunted at patrons, and told them we didn't have books, (but then I found myself wrong, and delighted them.) So, I can still do my job, and well, but I am like dead wood inside. Argh.
penned by Sarah Louise at 4:31 PM No comments:

Index no time for labels, translate: i have no time to be witty...
Newer Posts Older Posts Home
Subscribe to: Posts (Atom)